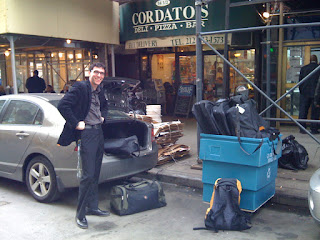 So, on Friday, PJ & I auditioned for a concert series here in NY (which shall remain nameless so as to minimize jinxes). We offered the following rep:

Now, even though the Part was made famous by the HBO movie Wit, we were pretty sure that was the last piece they would ask for.

So, we started with the Ravel, our choice. They asked for the second movement of the Bach. And then, believe it or not, the Part. And they heard it all: not part of the Part, the whole 7 meditative minutes of it. Seriously, not what you would expect from an audition committee.

In other audition news, the maintenance guys at the building were very accommodating and gave us a giant bucket on wheels in which to transport the marimba: 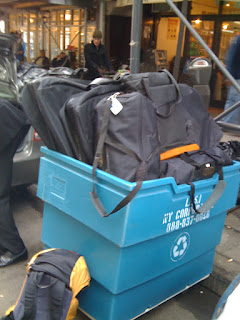 There it is, all of the parts in parts, all in a bucket on wheels, parked in the gutter as we load out from the audition.